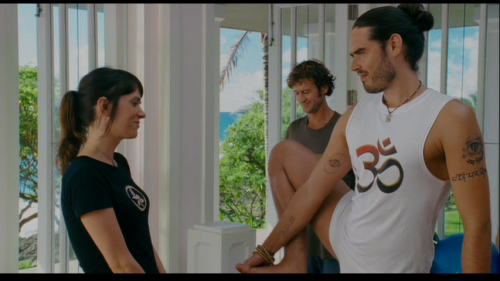 I’ve been feeling kinda down on yoga these days. Not as a whole concept, clearly, but the modern yoga situation is disheartening, to say the least. But during my Krav Maga L2 belt test this weekend (which was mentally, physically, and emotionally exhausting) at some point during the madness I had a thought that stuck with me: I wouldn’t be able to do this if it weren’t for yoga. If I hadn’t spent years on the mat being present in the moment, I wouldn’t have signed up for the test in the first place. Because if you look at the thing as a whole: learn eleventy-billion techniques. practice them enough to execute them well while under pressure, now do that for 8+ hours straight over and over and over again – I would have said WELL FUCK THAT. but if you look at the thing through the lens of being present it becomes: show up. do a thing. breath. repeat.

Many things taken from a yoga perspective become doable and often, even enjoyable when you become fully present. and that’s really nice. so, thanks yoga for that.

What I’m having a really hard time understanding is how we got from working towards being fully present, fully aware, existing in present time as the aim of yoga, to this cult of positivity good vibes only crap?
HUH?
These things could not be more different and yet, I see more and more and more of it infect yogis and yoga classes daily. Living fully in the present moment DOES NOT MEAN being blissed out all the damn time. You do realize the only way to achieve that is the extreme denial of the actual state of the world around you, right? either that or a raging drug problem – take your pick.

Yoga is an invitation to know yourself fully and doing the work, the neverending much harder than an 8-hour belt test work, can not happen if we are living in denial of our feelings. Yoga teachers: are you asking your students to examine how a thing feels or are you telling them what to feel? Students: are you really feeling groovy or did you just stuff your anxiety and grief down deep inside so you don’t harsh anyone’s mellow? What if you are practicing yoga in a way that takes you further and further away from yourself?

I don’t have the answers, but I do have an idea – stop letting the BS slide. When your yoga buddy starts spouting nonsense, call them out on it. If you teach, think about what you are saying and what effect it might have. Help each other. We can do and be better.

View all posts by leighfishercreates

Y’all!!!!! My friend Zoe is such an amazing artist! She does commissions too. Go get yourself some original art before she’s super fucking famous and none of us can afford her anymore.
Wait for it
This salty genXer will figure out how to get the captions to transfer from tiktok, but for now: follow @bighoopbabe over there for more cats, hoops, size positive content, and OPINIONS(tm) than you can handle.
Loading Comments...
Comment
×